The 1.6 Documentation is no longer maintained and some information may be outdated.

This means there will be no more security or maintenance releases for these series and forums running these versions of MyBB may be at risk of unfixed security issues. All administrators are strongly encouraged to upgrade their forums to the latest release of MyBB as soon as possible.

Users can only give another user a rating once, and can later remove or change that rating. Moderators and administrators are allowed to remove any rating. 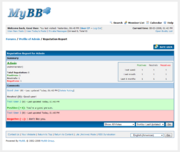 Each rating of a user also must include a comment at least ten characters long. 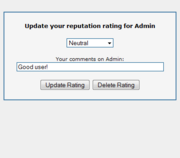 To rate a user, either click on the "Rate User" button at the top of the Reputation Report, or click on "Rate" next to the user's reputation in their profile.

Clicking on these will bring up a pop-up window that allows you to select the ratings worth and enter a comment (at least ten characters long). The rating can either be positive, neutral, or negative. You may see more than one option for positive and negative - for instance, both Positive (+1) and Positive (+2). The administrator can set how many points each positive or negative reputation can be worth for each user group. This gives members of certain user groups the ability to award a more powerful rating for certain users.

Edit this page on GitHub